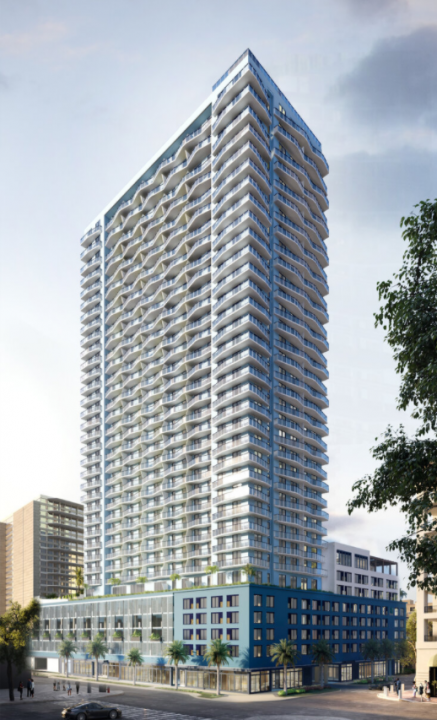 A 36-story mixed-use building planned for the northwest corner of 2nd Street and 1st Avenue North in downtown St. Petersburg Florida is planned to move forward. The developer Greystar Real Estate Partners recently closed on the land and two construction loans. After the closing a fence was erected around the perimeter of the site. Site preparations have already begun, and vertical construction will start in the New Year. The $170 million project will top out at 357-feet and will contain 357 market-rate rental units and a 172-key hotel. The hotel will be an AC Hotel by Marriott. A rendering of the project shows a modern residential tower on the south side of the property, fronting 1st Avenue North, with jagged glass balconies. The hotel component of the project will occupy most of the eastern side of the block, with four floors of hotel rooms fronting 2nd Street North and an additional three floors atop the parking podium. Amenities for the project include a shared sixth floor indoor and outdoor deck that will feature a fitness center and pool, as well as a 36th floor roof deck that will provide an additional pool and amenity space. The 8-story hotel will also feature a meeting area and rooftop bar. The Marriott hotel is expected to be operational by Q4 2022 and the first residential units will be ready for move-in by Q1 2023.
For more information on this and upcoming hotel construction and renovation projects in the planning, design, pre-construction and construction phase including who is involved with their contact information, Project & Supply Pricing Quotes, Preferred Vendor Directory, Careers & Featured Vendors please visit: HotelProjectLeads.com and subscribe today.