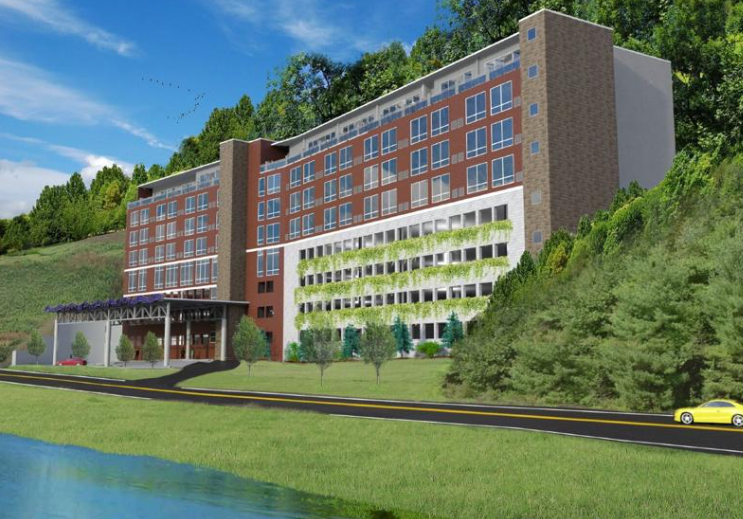 The Easton, Pennsylvania Planning Commission granted a conditional land development approval for the proposed Grand Riverview Hotel on South Delaware Drive. The proposal is for an eight-story, 108-room hotel by developer Terry Briggs of Chester Franklin Group LLC. The facility is to be located on the river corridor at 289-303 S. Delaware Drive, also known as Route 611. In addition to the guest rooms, meeting and event spaces, a restaurant and bar, rooftop venue, terrace and gazebo are planned. The developer’s plan is to reactivate the cave left on the property by Kuebler Brewing Company by using it in a food and beverage concept. In addition, the proposal calls to preserve any existing foundation walls left behind by the previous building. The brewing company opened in 1850 and closed just over 100 years later in 1952. The proposed 160,296-square-foot hotel will rise 98 feet above the ground and will include 3.5 parking floors. The first floor parking deck will include 49 parking spaces, with 47 combined on the second and third floors, and 21 on the fourth for a total of 215 spaces. In addition, the developer indicated an exclusive elevator is proposed for the fourth floor, which visitors can take down to what will be called Kuebler’s Cave. The fifth, sixth and seventh floors are scheduled to consist of a mix of king- and queen-sized rooms and various amenities. A penthouse is proposed for the eighth floor, which will include kitchen and banquet facilities, meeting spaces and a restaurant.
For detailed information on upcoming hotel developments, construction & renovation projects in the planning, design, pre-construction and construction phases including who is involved plus their contact information and our Preferred Vendor Directory & featured vendors please visit: HotelProjectLeads.com and subscribe today.