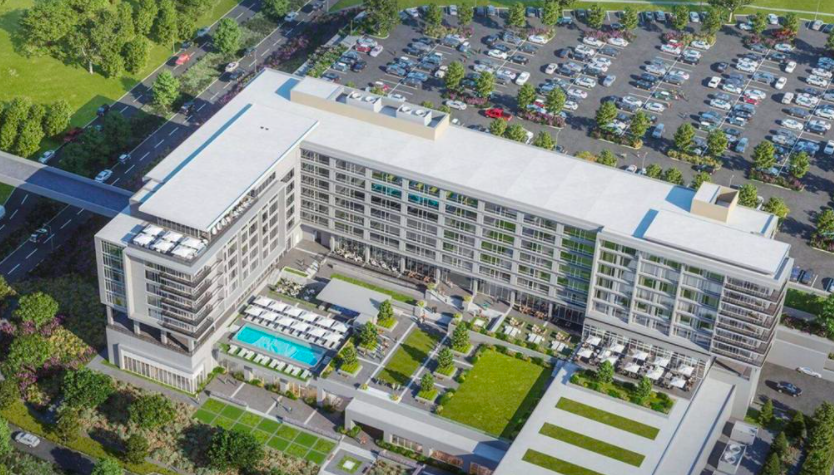 Hotel developer Coral Tree Hospitality plans a hotel to be built adjacent to the Air Force Academy’s planned new visitors center as a one-of-a- kind iconic property that will pay tribute to flight in Colorado Springs Colorado.  The 375-room hotel will become as linked to the academy. The hotel, to be built just east of the academy’s north gate, will feature a wellness spa, rooftop bar, a full-service restaurant, cafe, business center and gift shop and an outdoor lawn, pool and sundeck. But what will really set the hotel apart from others will be its two flight simulators in the lobby. The simulators will reproduce the flight deck of a Boeing 737 aircraft with seats, throttles, switches, pedals and yoke from an aircraft of the same model. The name of the hotel will not be selected for another three or four months. It will not carry a national brand. The project will be financed by $250 million in bonds that were sold Jan. 31 through underwriter RBC Capital Markets, along with another $90 million in bonds for the visitors center. Construction on roads and utilities in the 57-acre site, called True North Commons, is expected to begin by April with the hotel and visitors center underway a few months later. Both projects are expected to open in early 2024 with office buildings and restaurants planned in later development phases. Silver Development Partners, headed by Dan Schnepf, a founding partner of Matrix Design Group is developing the visitors center. Provident Resources Group, a nonprofit that specializes in housing, health care and education facilities, is developing the hotel and the rest of True North Commons. Coral Tree operates 23 hotels and resorts, including the Magnolia Denver and Ptarmigan Inn in Steamboat Springs. FAndré Fournier is executive vice president of Coral Tree Hospitality.
For detailed information on upcoming hotel developments, construction & renovation projects in the planning, design, pre-construction and construction phases including who is involved plus their contact information and our Preferred Vendor Directory & featured vendors please visit: HotelProjectLeads.com and subscribe today.