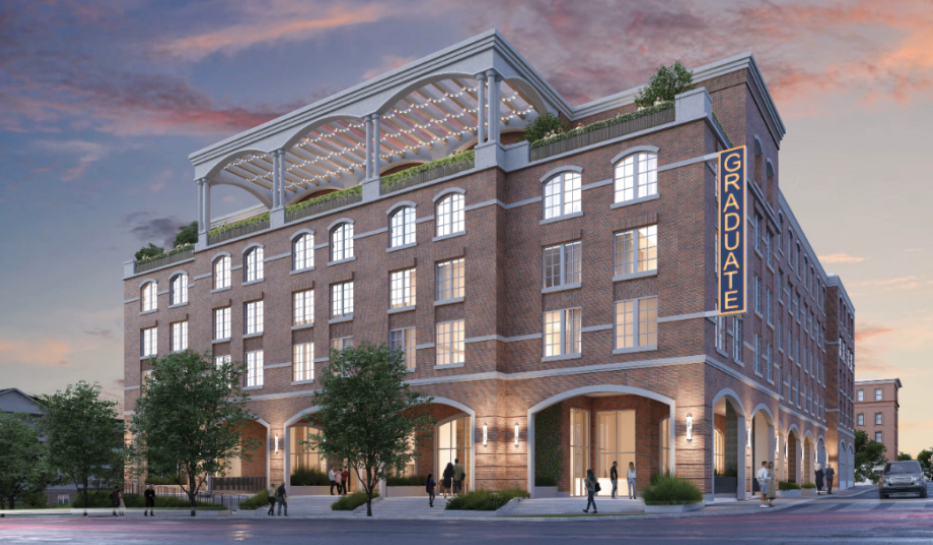 A Graduate Hotel is planned to be built on the current site of Anders Bookstore at the corner of West Magnolia Avenue and Wright Street in Auburn Alabama. The project will bring a five-story, roughly 140,000 gross square-foot Graduate Hotel to downtown Auburn, with 177 keys, event space and a coffee shop on the ground floor that will be open to the public. The hotel will feature a drop-off lane and its main entrance along its Magnolia Avenue frontage, and a raised porch that wraps around Magnolia to Wright Street. The on-site parking, the vast majority of which is in an underground deck, will be served by valet parking. The streetscape will try to continue and complement the existing streetscape downtown, with brick paving and tree wells. The fifth floor of the building features a food and beverage space and a terrace covered by a pergola and trellis. Jillian Agdern, of Hartshorne Plunkard Architecture is designing the project which is being developed by AJ Capital & Graduate Hotels.
For detailed information on upcoming hotel developments, construction & renovation projects in the planning, design, pre-construction and construction phases including who is involved plus their contact information and our Preferred Vendor Directory, please visit: HotelProjectLeads.com and subscribe today.