Historic Hotel Building to be Renovated 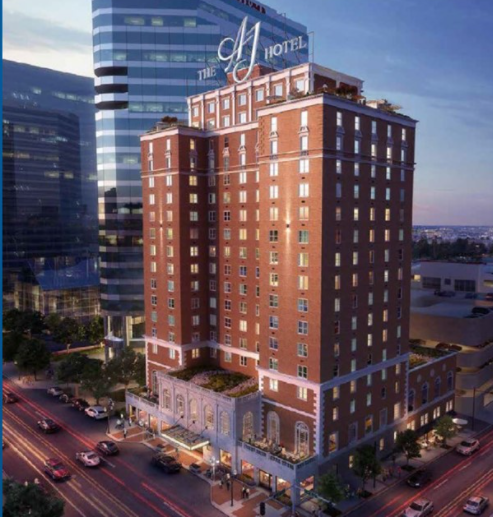 Developers BNA Associates have submitted plans to transform the historic A.J. Building, in Memphis Tennessee into a boutique hotel and live music venue, called the Hotel AMERICANA. In the project summary provided would redevelop the building into a 17-floor hotel with 143 rooms and suites with kitchenettes. It would also include a rooftop jazz bar, a restaurant and live music venue, a garden bar, retail space, a fitness center, as well as a lobby game lounge with billiards and shuffleboard. The developers plan to bring back many of the old features of the A.J. Building during its early history as the Andrew Johnson Hotel, including restoring the original grand staircase design and following the 1920s-era room pattern. The room plans would be updated with modern styles and would be built with an extended-stay format in mind, including kitchenettes and living rooms with pull-out sofas.
For detailed information on upcoming hotel developments, construction & renovation projects in the planning, design, pre-construction and construction phases including who is involved plus their contact information and our Preferred Vendor Directory & featured vendors please visit: HotelProjectLeads.com and subscribe today.