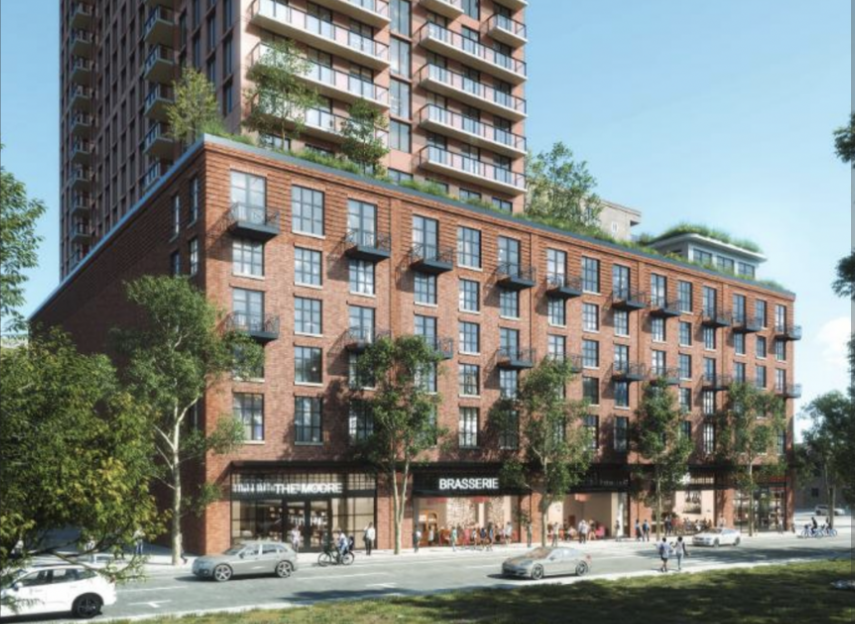 The area of Moore Square in Raleigh North Carolina is planned to be reimagined into an urban development with of apartments, a hotel, retail and dining options and a grocery store. Loden Properties proposal is for land to the east and south of Moore Square. Loden has partnered with Greystar and Greystone Affordable Development to propose a project with 560-590 multifamily units, a 135-room hotel, a 22,000-square-foot grocery store, 5,500 square feet of retail and dining space with a plaza and a new building for Raleigh Rescue Mission, which provides assistance to the homeless. The multifamily units would include 160-190 affordable units and 400 market rate apartments. There would be a mix of affordable units at 30, 50, 60 and 80 percent of the area median income. The retail portion would target locally focused businesses. The property is 16 parcels currently zoned downtown mixed-use up to 20 stories and up to 12 stories. Loden’s proposal includes a 150-160 room boutique hotel, 25,000 square feet of coworking space, audio/recording production and art studios and a reuse concept for Esso Station. It also includes a relocation of the Norwood House. Loden partnered with Northpond Partners and Summit Hospitality for this portion of the project. Loden Properties has developed several projects including The Longleaf Hotel and Lounge. Summit Hospitality owns seven hotels in Raleigh.
For detailed information on upcoming hotel developments, construction & renovation projects in the planning, design, pre-construction and construction phases including who is involved plus their contact information and our Preferred Vendor Directory & featured vendors please visit: HotelProjectLeads.com and subscribe today.