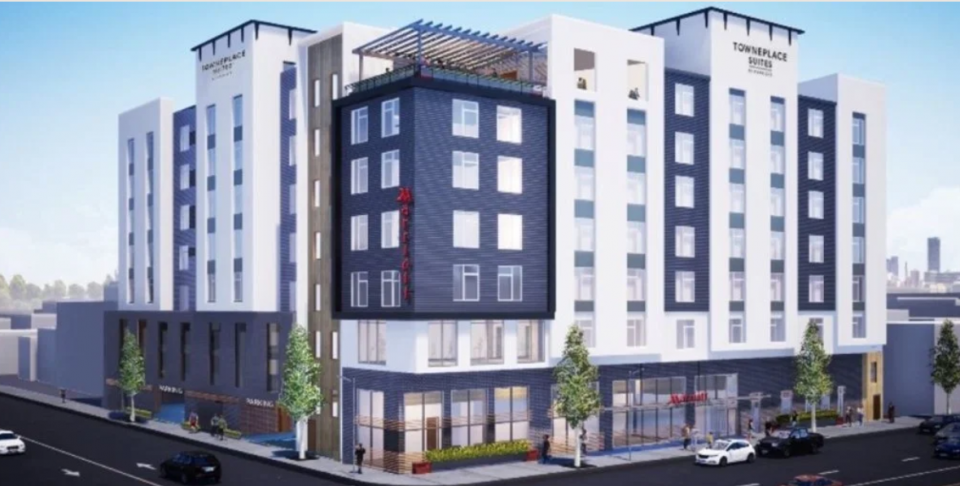 A new hotel is being eyed in downtown San Jose California next to a big transit village that Google is planning near the Diridon train station. The proposed hotel at 491 W. San Carlos St., which is near the corner of Josefa Street in downtown San Jose.
The 170-room hotel is being developed by Urban Catalyst, a real estate firm that was formed to capitalize on the tax advantages possible in opportunity zones. The hotel would be built at what Urban Catalyst calls the Keystone site. Heading the project is Joshua Burroughs, a partner with Urban Catalyst.
Urban Catalyst on Wednesday submitted preliminary plans for the hotel, which would be operated by TMH Hotels headed by Walter Brosch as CEO. The developers envision the lodging as an extended-stay hotel that would cater to business travelers.
The hotel will be branded as a TownePlace Suites Marriott brand geared towards extended stays. Jeff Current, executive with Studio Current is the designer of the hotel.
For more information on this and other upcoming hotel construction and renovation projects in the planning, design, pre-construction and construction phase including who is involved and their contact information and Preferred Vendor Directory please visit: HotelProjectLeads.com and subscribe today.