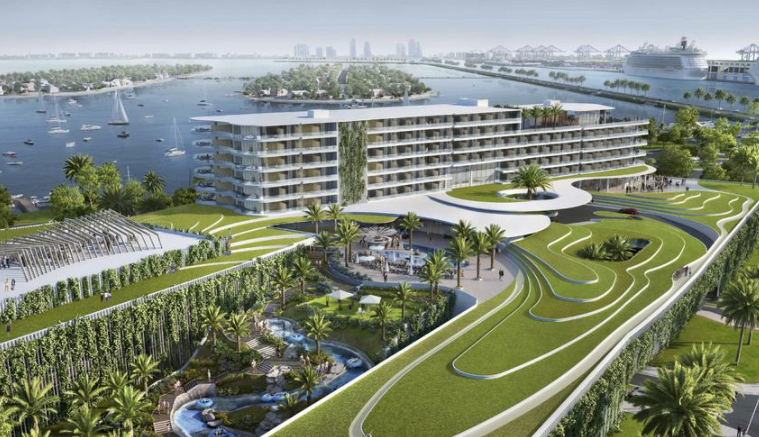 A 300-room hotel with meeting and restaurant space is proposed for Jungle Island Watson Island in Miami Florida. ESJ JI Leasehold LLC, a subsidiary of ESJ Capital Partners, proposed the major redevelopment of Jungle Island’s parking garage and existing meeting space. The attractions to the east of the development will remain, as will the botanical gardens to the west. Everything else will be redeveloped. The 300-room hotel would rise 11 stories along the north border of the property. The lobby would be located on the fifth floor, as the proposed hotel would be built on top of a four-story parking garage. According to site plans, some hotel rooms would occupy floors three and four adjacent to the parking garage. The fifth floor would also have a bar, all-day dining, a round-about drop-off area with valet service, a gym and room suites. It would also include a pool deck, another bar and a fire pit outside. Levels six through 11 would house the majority of the hotel’s rooms. The standard room would be 380 square feet, but suites could be as large as 1,698 square feet. Floor 10 will include a restaurant with both indoor and terrace seating, as well as an outdoor bar. Site plans suggest the restaurant could seat 180 customers. The Jungle Island Hotel would collectively have 9,500 square feet of dining space, including the restaurant on the lobby level. Adjacent to the south side of the hotel would be the expanded parking garage. The structure would provide 787 parking spaces on four floors. The proposal includes significant changes to the property’s meeting space. The redevelopment would add an additional 12,000 square feet of meeting space, including outdoor event space that could be added atop the existing ballrooms. EoA Group designed the Jungle Island Hotel. Elie Mimoun, chief compliance officer at ESJ, is listed in the application.
For more information on this and upcoming hotel construction and renovation projects in the planning, design, pre-construction and construction phase including who is involved with their contact information, Project & Supply Pricing Quotes, Preferred Vendor Directory, Careers & Featured Vendors please visit: HotelProjectLeads.com and subscribe today.